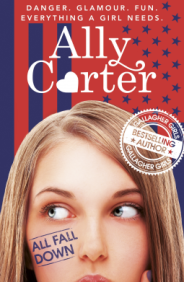 Oh, Ally Carter definitely knows how to start off a new series with a bang! I have never actually read an Ally Carter book in my life, nor have I read any YA mystery books recently, but I am pleasantly surprised by the outcome of All Fall Down.

Grace, the main character in the book, is one of those girls you probably would call weird. And I mean it. Ever since she saw her mother being shot by a scarred man she has had recurring nightmares of that fateful night – there is just that little problem that no one actually believes her. Until she sees the murderer again — and decides to take matters into her own hands.
There were so many hilarious and, again, weird conversations throughout the book that I really started wondering where the author draws all her inspiration from. Grace knows that she is considered being crazy since no one except her actually witnessed the murder. But although she is a rather withdrawn character, nothing can stop her from speaking her mind, which makes her a pretty interesting character. There were some psychological approaches to her personality too (at least at the end of her book) so you get a pretty good insight into her inner delirium.

What impressed me the most about the book was probably the storyline. Carter certainly takes delight in giving the reader the runaround. Nothing is really just black and white, and when you think that you have finally figured the whole plot/book out, Carter again gives proof that she can prove you wrong. Moreover, she surprises you with spying background knowledge, introducing them at unexpected places which makes you think wow, those kids are really badass. Setting the story in Embassy Row, the street where basically all embassies are residing, gives an edge to the story, and I was really fascinated by the way Carter describes the relation between different countries, yet neatly skirts any current political affairs on an international level. There is not a lot of depth to this aspect though, so maybe this might come off a little bit too flat for a more “mature” audience.

While I usually like some romance in a book, I was quite surprised to find out that this aspect – quite contrary to what the synopsis might indicate – plays a rather minor role in Grace’s life. Instead, friendship and courage are the main focus of the book and I liked the way the bondings between Grace and her friends intensify over time. You could really feel the dynamics in their friendship

In the end, all the plotlines are neatly tied together and I found myself flying through the pages. You can feel that the book was written with lots of wit and heart. Carter has a simple and easygoing writing style, so while I believe that the book is intended for a younger Young Adult audience, I cannot say that I was under-entertained or by Carter’s writing.

2 thoughts on “Review: All Fall Down”