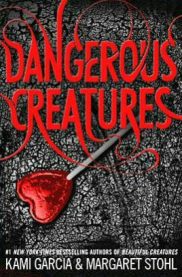 “My name is Ridley Duchannes, and nobody tells me what to do.” (Position 1199, Kindle)

Let me get this straight from the beginning: This book is extremely addictive and gripping. Unpredictable, right from the start. Exactly what I wished it would be, yet totally different. Refreshing. A roller coaster read. So much more than the blurb might indicate. I have always been interested in Ridley’s personality in the Caster Chronicles. For me, she has always been that broken character that has to put up a big up front, denying to have genuine feelings for others to prevent getting hurt again after she has been disowned by her family when she was claimed for the Dark. I mean, we have met Ridley in the previous books, but do we really know her?

In this book which stars Link and Ridley it is the first time for the cast of the Beautiful Creatures books to leave Gaitlin completely behind after they’ve graduated from highschool. The book starts off very promising and the excitement will last till the very last page. I mean, just read the conversations between Ridley and Link’s mom, the extremely conservative Southern lady. Or the conversations Ridley and Link are having on there “road trip” to New York to start a new life. These scenes were priceless! The chemistry between those two was so refreshing! Link really has got a weird way to show his affection. How can say something such as “Our love is rare, medium rare” to a girl?? But exactly these small sentences make him totally likable and unique.
Also, for the first time in forever Ridley tries to fully commit in a relationship, partially also out of bad conscience as she is hiding some secrets from Link. It’s a recipe for disaster which makes Ridley “reassess” her life. Like to which extend she is willing to sacrifice her life in order to prove Link there’s more to her personality than just a shallow bitch. There were so many hilarious scenes, such as when she attempts to find an ordinary mortal job! But after this book you will really understand her.

Needless to say, I’m totally in love with the authors’ style of writing. It was the reason I kept reading the book although I was a bit hesitant to pick the book at first since I remember the books in the Caster Chronicles being kind of “long-wided”. But dude, I was so wrong. The novel conveys this New York underground charm, this mysterious atmosphere, making the story irresistible.
This book is not exactly one with a lot action in it. It lives on short small twists that literally foreshadow the story; it never gets boring. Adding to that are the different POVs. Many new characters are introduced in this book and they were all so interesting. Such as Link’s new band members who, miraculously, seem to be extremely fond of Link’s music*. I was intrigued by them right from the start as they are one of the few characters who dare to stand up to Ridley. Their encounters were too funny for words!
And then, there is Lennox Gates who seems to know more about Ridley than he admits at first. Like he could almost understand her. There’s a dark aura surrounding him, making him mysterious from the beginning until the end.
The book definitely lives on the characters’ personalities. I LOVE Ridley. She is that fearless and kickass girl that never hesitates to speak her mind; that kind of hero I would choose to be. She has this pungent sarcism, that cutting self-irony. We get to learn more about Ridley’s childhood before her Claiming in some flashbacks. Personally, for me these were some of the small highlights in the book. It was heartbreaking to see how Ridley has struggled all through her life, accepting her siren fate at a very early stage, knowing she is no longer welcome to the people who used to be her family just because she is claimed for the Dark. There’s no place for self-doubts in her life and yet she cannot fight the urge to become a better person. The question “Who is the real Ridley Duchannes” runs like a common thread through the book. It was almost poignant to see her self-hatred for being herself, a siren, bound to ruin other people’s lives; yet she cannot help herself falling for Link. Hard.
The novel literally ends with a BANG, leaving me heartbroken and craving for more!

The book is darker, edgier and hell of a lot more engrossing than I have expected. I TOTALLY recommend it to anyone, especially to those who enjoyed reading the Caster Chronicles. It’s a fantastic read about friendship and finding yourself, especially when it is hard to tell what is truth or even reality.

*Having read the book, let’s face it: Link’s music is crap. I could really sympathize with Ridley’s non-fondness of the music. I mean, how do you even come up with such horrible lyrics such as “My Chicken Wing / You make my gut sing” (Position 2520, Kindle)!!!

Many thanks to Netgalley and Little, Brown Books for providing me with this review copy!